Home About API News How Does A Circular Polarizer Work

Back to all Blog

How Does A Circular Polarizer Work

Light is a funny thing in that it is considered both a particle and a wave, and when it comes to a circular polarizing filter, it is easier to think about the emitted polarized light as a wave. I’m sure the reader already knows this, but I would like to give a little background on light, polarization, and circular polarized filter composition before we get to the video.

The linearly polarized light then passes through the quarter-wave plate. Here is the critical and tricky part: the polarization axis is a vector between the electrical fields (Ex and Ey respectively). 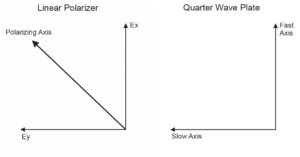 The quarter-wave plate has what is called a Fast Axis and a Slow Axis. Note that the “Quarter Wave” designation denotes how much the Slow Axis will retard one of the electrical fields as it passes through the wave plate. To create true circularly polarized light (as opposed to elliptically polarized light), the polarizing axis must be at 45º to the fast and slow axis. Thus the relative 45º polarizer axis allows the electromagnetic fields to be parallel to the fast and slow axis of the wave plate. With all that lined up, the polarized light then exits the quarter-wave plate, with either the Ex or Ey fields shifted by a quarter of a wave.

“So what,” you say? The net effect is that concerning time, the Ex and Ey electric fields, and the polarizing axis that is a vector of the two electric fields, the light that exits the back of the circular polarizing filter will have a polarization state rotating. Hence the term “circular polarizer.” Also, the electric field (Ex or Ey) that is parallel to the wave plate’s slow axis will determine which field is shifted and thus which way the polarizer axis rotates, either clockwise (right-handed) or counterclockwise (left-handed).

But, from a mechanical sense, how do the relationships of the electric fields really do that as it relates to causing the polarizer axis to rotate? And that, my reader, leads me to this cool and informative visual representation of the of the Ex and Ey electric fields, the quarter-wave shifting of one of the fields, and the rotating polarizing axis of a circular polarizer. Enjoy! 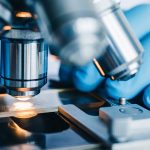 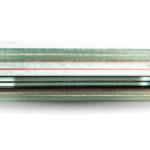